I’m happy to report that I’ve completed my first year of library school, and at the moment I’m spending some time with my parents in Toronto before I start my summer job in Ottawa on May 1st. Looking back over my year, I decided that now would be a good time to write a personal post about my experiences leading up to my MLIS program. I’m not sure that my story is typical of library school students, but then again, it seems that we come from a pretty wide variety of backgrounds.

I received my BA in psychology from UBC in the spring of 2006 (two whole years ago – wow!). At that point, I had never considered library school; I was vaguely aware of the field of “library science,” but I had no idea that being a librarian required a Master’s degree. To be perfectly honest, my main use of the public library was as a free DVD rental service, and I only went to the UBC libraries when I was performing research that couldn’t be done through their online services.

Upon graduation, my plan was to pursue graduate studies in social psychology. Fortunately, the other part of my plan was to take a year off, in order to write the dreaded GREs, put some time into my grad school applications, and then spend the rest of the year living in Paris and working on my French. I say fortunately because, looking back, I now realize how important that year was in terms of figuring out what I really wanted to do with myself. In many ways that year was disappointing (I spent months studying for a test that I didn’t end up needing at all, and I had to cut my time in Europe short), but it was entirely necessary, and I would implore anyone thinking about going straight from undergrad to grad school to consider taking some time off in between.

Shortly before the application deadlines, I was struck with a rather unsettling notion – perhaps psychology was not the right field of study for me. After close to four years of preparing for a career as a psych professor, I suddenly realized that I wanted a grad school experience that would leave me with a wider variety of options. Around that time, I also stumbled upon a t-shirt for sale from one of my favourite webcomics, Questionable Content. Here I am last August, just before heading off to library school, wearing this supremely nerdy shirt: 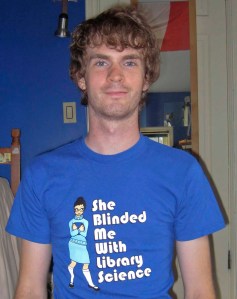 No joke – that’s really how the idea of library school occurred to me. I saw it on a t-shirt design.

Fortunately, I still had time to apply. I actually didn’t spend much time comparing schools. I’d been wanting to live in Montreal for a long time, and I knew McGill was a prestigious school (in general, not necessarily for its library school in particular), so it was my first choice and in early 2007 I was accepted.

Whew. I think that’s enough for now, but at some point I will move on to my reflections about library school itself. I hope the weather is as nice where you are as it is in Toronto right now!

5 thoughts on “Story of my life”